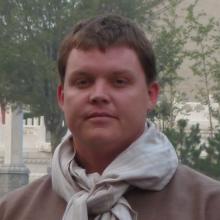 Raised on a farm in rural Massachusetts, Justin Kelley received his B.A. in Environmental Economics from Tufts University. After a brief stint working in land conservation for the US Fish and Wildlife, he traveled to India in 2005 where he spent ten years living in and around Tibetan refugee communities. During this time, he studied Tibetan language, Buddhist philosophy, and meditative practices. Additionally, he guided international experiential education programs for both study abroad organizations, as well as north American Buddhist groups. In 2015, he began studying in Rice University’s Department of Religion with Dr. Anne C. Klein. His general interests include meditative and philosophical systems in Indian and Tibetan Buddhism, the intersection between Buddhist theories and the contemporary scientific discourse, phenomenology, and contemplative education. His current research focuses on conceptions of purification as found within the work of fourteenth century Tibetan masters Longchen Rabjam and Third Karmapa Rangjung Dorje. In particular, he is interested in the psychophysical transformation that occurs within these presentations, and the associated epistemologies that are both utilized while approaching this goal and born from such transformation. During the 2016/17 school year, he taught two undergraduate courses at Rice entitled Buddhist Art and Literature and Tibetan Language, Literature, and Culture. He currently serves as the Chair of the Department of Religion’s RELI@Rice program, which creates interactive and supportive educational spaces aimed at fostering both rigorous intellectual analysis and creative discovery. He also serves on Tergar International’s translation committee.