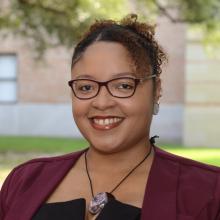 De'Anna Daniels is a doctoral student in the African-American Religion concentration in the Department of Religion at Rice University. De'Anna earned her B.A. in Religious Studies from Alma College in Alma, Michigan. In 2013, she earned a Master of Divinity and in 2014, a Master of Theology from Union Presbyterian Seminary in Richmond, Virginia. In 2016, she earned a Master of Arts in American Studies, with a graduate certificate in Women, Gender, and Sexuality Studies from Lehigh University in Bethlehem, PA. While studying at Lehigh University, she received a Strohl Grant and Award for Research Excellence in Humanities and Social Sciences. DeAnna Daniels’s research interests include Black religion, the intersections of Hip-Hop, Womanism, and gender, Black speculative fiction, visual culture, and art. She is also interested in critical race theory and cultural studies.