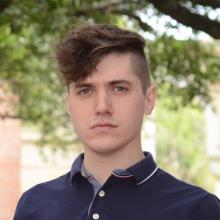 Benjamin Mayo received his B.A. in Philosophy with honors from Rice University in 2011 and is a doctoral candidate in Religion supervised by Jeffrey Kripal. His dissertation explores the philosophies and practices of attempts at spiritual evolution beyond Homo sapiens from the 19th century through their manifestations in contemporary thought and practice. He is also currently researching epistemologies in new religious movements, as well as examining the ethos of The Order of Nine Angles particularly their use of violence, terrorism, and human sacrifice as religious practices, and is exploring the influence of ecstatic and paranormal experiences on the philosophy of Friedrich Nietzsche.

Benjamin is the Reviews Editor of Magic, Ritual and Witchcraft (published by the University of Pennsylvania Press). He has been a Teaching Assistant for Intro to the Study of Religion, Nietzsche & Religious Thought, and Visions & Visionary Practices.