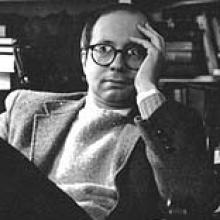 Recent work deals with Euro-Christian-related reactions to change of intensely challenging kinds, comparing earlier Atlanto-European senses of decadence with contemporary American accounts of decline as top-down-enforced dispossession both economic and cultural, looking simultaneously at elite and popular cultural material as well as at experiments in instauration extending to dissident visions of justice. The fate of Protestantism and the symbiosis between pessimistic popular culture (e.g., Fight Club) and the tradition of high culture pessimism are featured (see Stroup’s 2007 Rice Rockwell lecture entitled “Cultural Pessimism, Popular Culture, and the Search for Civic and Religious Identity in Contemporary America”). Attention goes toward views of the Western self in the long march toward the End in diverse visualizations; the expiration of civic humanism in its religious connection in an anti-European atmosphere post-1965 resting on fully-converged economic (anti-historic-Christian) definitions of the self in society, politics, religion, and the academy; popular culture’s “minority report” of pessimism as a kind of dissident religious expression of the sense of human powerlessness reflecting the death of the classic humanist tradition and the historic Christian faith along with the disappearing of their means of replication in an age of enforced globalism. In the current year, activity concentrates on recent spy and secret-agent scripts and narratives (e.g., the Bourne sequence, Wag the Dog, Rubicon, Shooter). Involved is an extended re-examination of Jacques Barzun’s 1965 claim that making espionage a key topic in culture and government indicates late-stage decadence into a low-trust society moribund on account of affliction with failure of personal agency. Other recent emphases: analysis of the internet-thematized contemporary search for a beacon in the context of a perceived sea-change leading to loss of base (e.g., populist dystopian alarm at perceived decadence and the distress from collateral damage therewith connected but rarely treated in conventional academic studies); internet memetic techniques with attention to magical thinking; “Esoteric Kekism” as an emergent new quasi-religion vibrant on an alternate wave-length and consciously configured in awareness of the dwindling appeal of all wings of contemporary Christianity to would-be family-formers and disenfranchised opponents of multiculturalist globalism; the prophetic resonance in philosophers, poets, and theologians of history (Rivarol, de Bonald, Schopenhauer, Hölderlin, Donoso Cortés, Stirner, Burckhardt, Nietzsche, von Hellingrath, Spengler, Schmitt, Heidegger, Steding, Schumpeter, Sombart father and son, Pareto, Coudenhove-Kalergi, Toynbee, Quigley, Waugh, Pound, Eliot, Slezkine, Solzhenitsyn, Scruton, Raspail, Houellebecq, Evola, Dugin, von Kuehnelt-Leddihn, Jung, and Jünger).

The Struggle for Identity in the Clerical Estate, Studies in the History of Christian Thought, ed., Heiko A. Oberman, no. 33 (Leiden: E. J. Brill, 1984).

Specialization:
Contemporary dechristianization in the West and countersignals thereagainst; Euro-Atlantic Protestantism in transformation and regulatory capture analyzed according to Schmitt’s “stages of neutralization and depoliticization;” philosophies and theologies of history (e.g., Duchesne) as expressions of cultural pessimism; identity in relation to the academic study of religion in the context of the convergence of transnational capitalism and the triumph of “managerial elites” given the fact of enforced re-definition of identity; memetic and cyberspatial tactics and strategies among dissident upholders of a non-globalist sense of religious identity with particular attention to the current year.