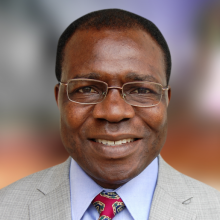 About:
Elias Kifon Bongmba combines his teaching of African religions and his research in theology and philosophy of religion working with African philosophical ideas and Continental philosophy. He is author of four books, three edited books, and has authored 60 peer reviewed essays and book chapters.

Books:
In first book, African Witchcraft and Otherness: A Philosophical and Theological Critique of Intersubjective Relations, Bongmba explored intersubjective relations by probing the ethics of witchcraft using the philosophy of Emmanuel Levinas. He has published other articles on ethical dimension of witchcraft in the context of the Christian church in Africa.

His second book, The Dialectics of Transformation in Africa, discusses the political aspects of intersubjective relations through an analysis grounded in the human sciences. Bongmba has also addressed current debates on the African Renaissance. The Dialectics of Transformation in Africa won The 2007 Franz Fanon Prize for outstanding work in Caribbean Thought. The Prize is awarded by the Caribbean Philosophical Association was given at its 2007 meeting at the University of West Indies at Mona, Jamaica, June 28, 2007.

Facing a Pandemic: The African Church and the Crisis of AIDS, is an interdisciplinary work in which he addresses the HIV/AIDS crisis and argues that the motif, the image of God, challenges religious communities in Africa to scale up the fight against HIV/AIDS at the local and national level through an ethic of love and compassion. He calls on religious communities to work with the global community to accelerate universal access to health care and promote the search for a vaccine.

Witchcraft as Social Diagnosis: Traditional Ghanaian Beliefs and Global Health. Roxane Richter, Thomas Flowers and Elias Kifon Bongmba is an interdisciplinary study that focuses on the witches’ village of Gnani in Northern Ghana, one of several witches’ village in the region. Women suspected and accused of practicing witchcraft have been exiled to certain villages, where separated from their families, they live under very difficult conditions. Our study is based in Gnani, where World Mission Possible has done medical work for several years. We conducted interviews in the village on two different occasions and talked with 95 women about their lives, family history, the accusations, exile and their lives now in the witches’ village. Our study examines the phenomenon of witches’ village as a gender based violence which overwhelmingly targets and stigmatizes women. We argue that disease, injury and other forms of maladies perceived as human made misfortune, if seen as social and biological conditions which could be addressed through other forms of medical intervention, would not cause the fear illness or the death of another person has caused and led to accusation and expulsion of the women who now live in the witches’ village.