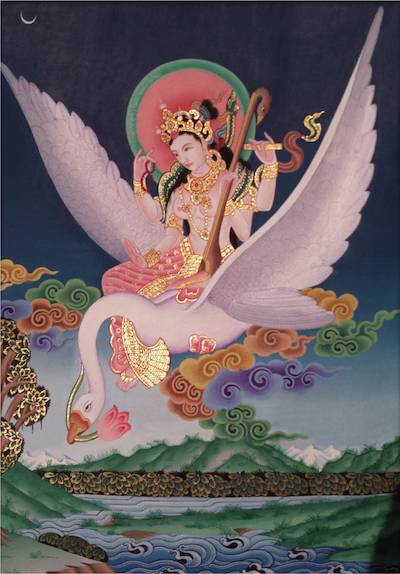 Buddhist literature grew out of the ancient Indian matrix of philosophy and yoga, and so was immediately challenged to articulate its own theories. Equally significant was the Buddhist traditions’ mandate to articulate systems of ethics, descriptions of agency, theories of knowledge and contemplative practice in the context of their central doctrine of no-self, anātman, with which they countered the Indian subcontinents views of self, or ātman. Buddhist literature rapidly grew to include many schools of thought on logic, meditation, epistemology, and cosmology, as well as histories, biographies, debate and philosophical textbooks.

From India, Buddhism travelled throughout Asia. This journey began within a hundred years of Buddha’s lifetime, with early forms of Buddhism taking root throughout Southeast Asia. Later formulations of Indian Buddhism, the Mahayana, with their emphasis on the trans-human qualities of Buddhas and universal concern for all life, migrated to East Asia; to China, Japan and Korea. The last major movement of Buddhism from India began in the 7th century, which saw the beginning of a four hundred-year period of intense scholarly exchange, likely the largest cultural transfer in history—much of the 1,500 years of Buddhist literature was systematically translated into Tibetan. In Tibet, Buddhism became the core of a newly emerging empire and and the center of perhaps the largest body of religious literature in the world. And now, in the 21st century, Buddhist texts, ideas, and teachers are coming West.

Students with a concentration in Buddhism have a variety of options. One is to conjoin serious textual study in English with another graduate concentration. Another is to do preliminary Tibetan language study and then work in Tibetan (possibly amplified by another canonical language) and combine this with other work in Buddhism. Still another is to use grounding in traditional Buddhism to look at issues of modernity, especially in relation to Buddhism’s current, and ever changing, status in the West.