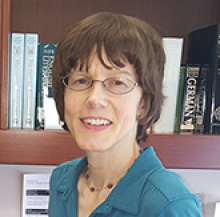 Speech, performance, storytelling, communication, and their representation in ancient Greek poetry were the initial focus of my research. Those same concerns now organize my teaching. In language courses, writing seminars, and other courses too, I encourage students to analyze the primary material in terms of audience, context, genre, and occasion, and to adopt the same approach when preparing their own material for essays and oral presentations.
At the same time, on a deeper level, I encourage students to use the processes of written and spoken communication as means to critique their own thinking by tracing problems that manifest in their writing and speech to errors in their thinking.
I teach interactively, and am constantly experimenting with new ways to help students learn actively.
My own current writing and research concern Ovid’s account in Metamorphoses 8 of the connections between teaching, learning, and creativity. I hope in due course to extend this study by comparing the ways in which other classical authors and texts represent those same themes.